At the beginning of March 2020, just before the pandemic shut down the world, Bridget and I went to Barcelona. It was a trip we had wanted to make for a very lng time, and, thanks to an astonishing deal on cheap airfare, we were able to make happen. So we were goimg, even knowing that the threat of a pandemic loomed on the horizon. We had to hightail it back to the U.S. when Trump canceled all international travel, but every single day we were there was a treasure. I have a zillion pictures of the food we ate and the markets we saw, and I will start adding them here as I work my way back through my archives.

Food tours are now a must-do part of any trip we take, and the food tour we had in Barcelona was really special. We were the only two people on the tour, so we got the complete attention of the tour guide and the locals at the various establishments we visited.

This is the pastry shop where the first picture was taken. Presumably one of the oldest in the city, in business since 1919. Located in the Gràcia neighborhood, which is one of the most desirable locations in the city. The local pastry speciality is the bunyol (buñuelo in Spanish), a doughnut-like fried dough that can be coated in sugar, or filled, or topped with melted chocolate, among other things. Traditionally, they’re a treat for Lenten season, but the never-ending tourist season keeps them available all year long. 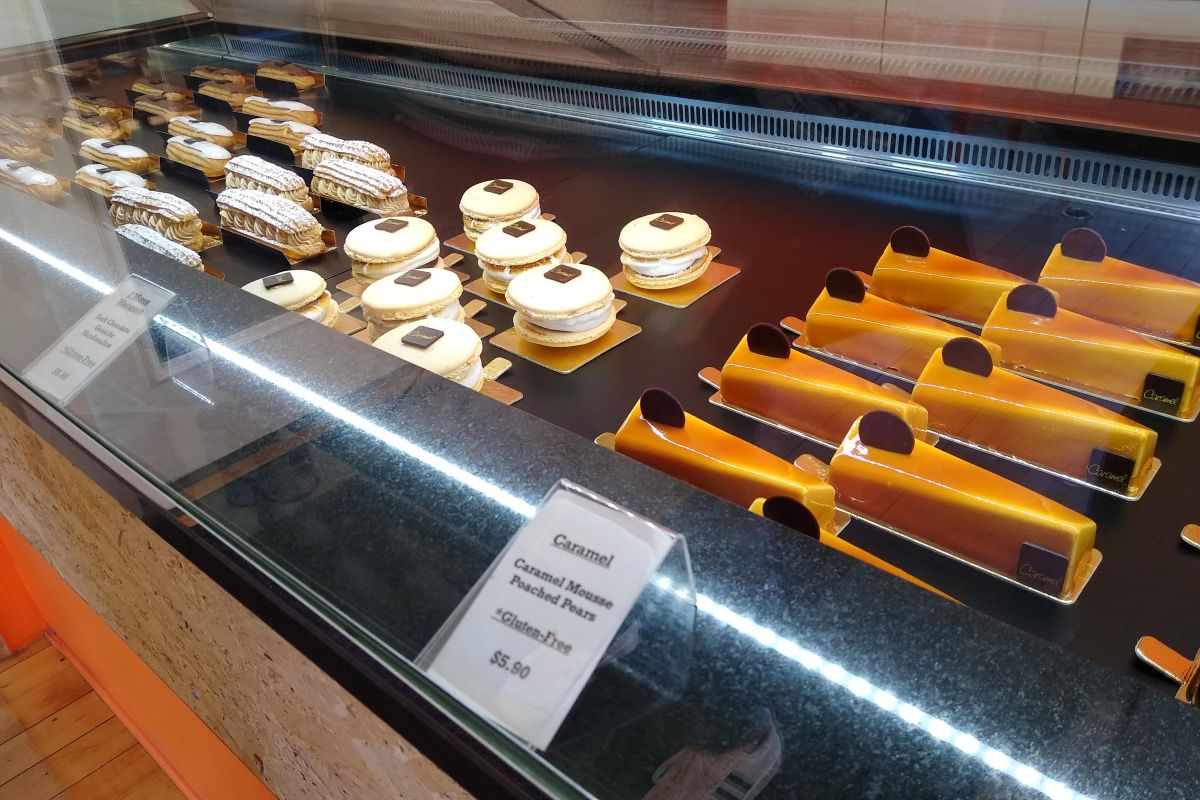 A photo I took at Caramel Patisserie on our first visit there. I will dig up a similar photo I took in Paris in 2003 so you can compare. Caramel is as good as anything I saw there.

We love Caramel Patisserie (I would link to their website, but it seems to be not working at the moment), a delightful little shop a short walk from our house. They are known around the area for their exquisite macarons, but they also have a selection of other French patisserie items like cake slices, croissants, and other traditional French pastry. I especially like these cake slices. For our birthdays this year, we skipped making birthday cakes ourselves and just enjoyed these slices, which we’ve decided is worth turning into a tradition. This particular evening was not anyone’s birthday, however. Our old friends Tony and Sharon had come to spend the weekend with us, and we’d stopped into the shop as we took them around downtown Salem. We had just come from spending most of the afternoon at the Notch Brewing beer garden, enjoying plate after plate of snacks to go with the beer, so no one was very hungry for dinner and thus we opted to skip straight to dessert.