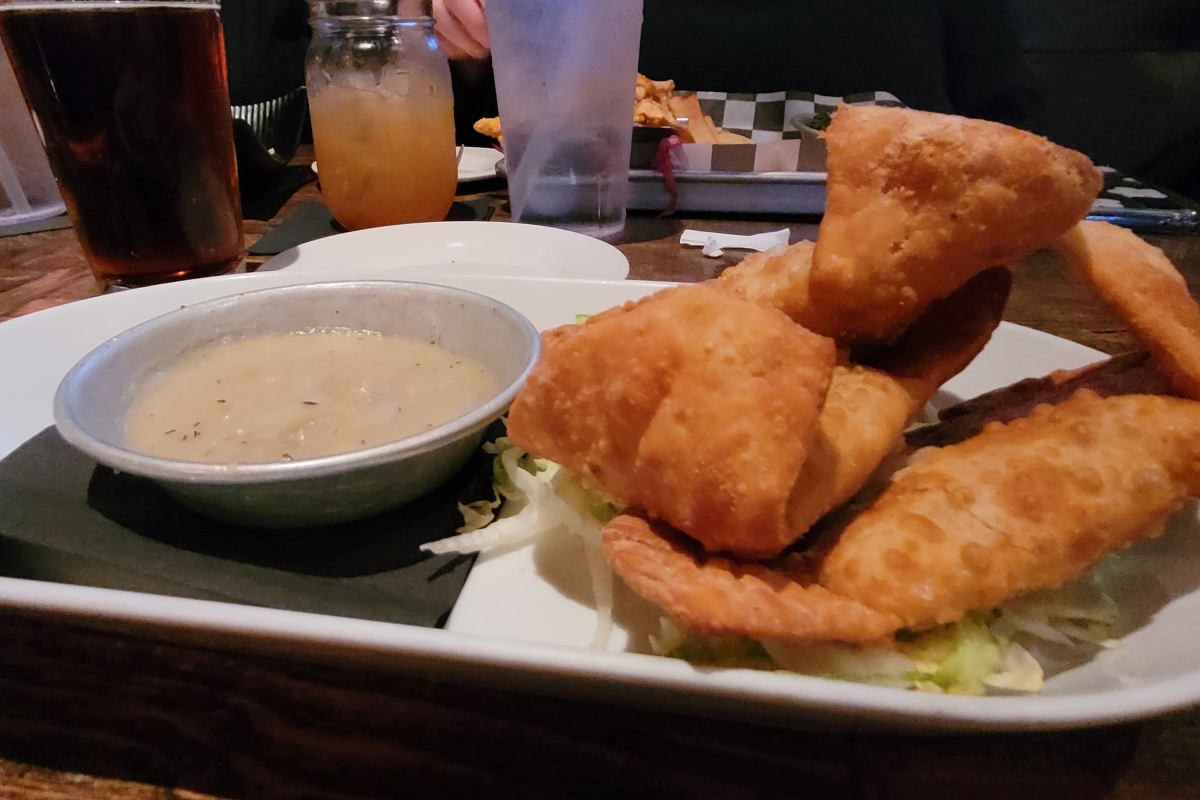 I don’t think I’ve ever encountered this appetizer anywhere else, but it is a brilliant idea for fall/winter. Empanadas filled with chicken and veg as you would find in a chicken pot pie, with the gravy served on the side as a dipping sauce. I had this at The Derby in dowtown Salem on Friday night and it was really good. The dough is standard empanada dough, and they’re deep fried, all of which was fine but I wonder how it would work, or even if it can work, with puff pastry and baked. I might have to try making it myself both ways.

This is on the menu as an appetizer, bur I had it as my main because I’d eaten a big lunch at work and did not feel like having a big entree. The Derby is pretty much focused on apps, sandwiches, and such in the first place, so that was no issue. My wife had the fish tacos and our daughter had buffalo mac and cheese. We’ve been to The Derby a couple of times now and have enjoyed the food, sticking to apps both times. At least in the middle of winter there aren’t a gazillion tourists, though it was normal Friday-night level of busy.

Went to The Derby in downtown Salem for dinner on Saturday night. Neither of us was especially hungry, so we figured some pub grub type food would be about the right level, and we were correct.

Like a lot of places in Salem, The Derby is focused on the bar crowd, and boy, was there a crowd. The weather was nice on Saturday, which brought people out and also meant that the usual parade of tourists has begun for the season. The noise level was deafening, and we almost walked out, but we stuck it out and enjoyed the food pretty well. We did agree, though, that we’ll avoid going there on the weekend in the future and save it for a Tuesday night or some other time when the crowd is smaller and you don’t require hearing protection.

Bridget had some buffalo cauliflower, and I had these crispy pork belly tacos. They were very good – the pork belly slices were definitely crispy and not very fatty, which is key to any pork belly dish. These were Mexican-style, so Cotija cheese and chipotle crema, but I’d bet they’d be great with a soy-ginger glaze and some Asian-style ingredients, too. They were on the Appetizer menu, so just the right size for “not-too-hungry”, but still real food. I also had a small bowl of black bean chili that was good, but nothing special.